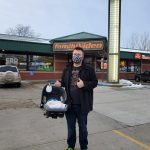 Aside from the birth of my daughter, 2021 didn’t have a really glowing start.

As I was sitting on the toilet (TMI?), a news story flashed on my phone with some heartbreaking news that I knew was coming eventually but still doesn’t keep it from stinging any less.

Family Video has announced it will close it’s remaining 250 stores, liquidating all inventory and fixtures.

I know…why get upset over a video store that rented movies and games out that has been basically obscure since streaming really became a thing? Well to me, the video rental process was more that just renting a movie or game, it was a massive part of my growing up history that I can’t believe that was able to enjoy all the way into my 30’s. I have been renting from Family Video since I was single digit age with my mother. Seemingly EVERY Friday night after school, my mom would come home from work, we’d pile into the car and drive to Family Video and rent a video game to enjoy over the weekend, and oh man if a new game console like Playstation or Nintendo 64 was out? We’d rent that to have over the weekend! You know how amazing THAT was?

Oddly enough, Family Video in Waterloo was one of my reasons that kinda pushed me over the edge to move to Iowa! It was right up the street from my apartment and made this new state feel like ‘a new home.’ Walking through the aisles, looking at movie boxes, ordering pizza from the Marco’s window, renting a new game and trying before I buy for $60 damn dollars….it was an experience. But it’s something we as a society no longer value anymore because it’s just easier to click on a movie on Netflix than get up of our asses and actually go and get something.

Renting a movie or game was an experience…the smell of the store, having a seemingly ENDLESS wall of movies to select, getting to watch special features on the disc, and even better? The social interaction with the person behind the counter that was there to suggest movies and talk face to face with…you don’t get that from a computer algorithm that just KNOWS what you like. Streaming services will SUGGEST what you may like based on what you’ve watched, but where is the exploration? Where is the social interaction? It’s just a computer TELLING you what you’ll like.

And I hate that…while computers have made EVERYTHING incredibly easy to do these days from shopping, consuming entertainment, socializing, etc…it is clearly the way things are going…but at what cost? Technology is teaching you every day to sit on your ass and consume whatever they want you to watch and eat. Even fast food that you HAD to get up and get? Can now be brought to your front door.