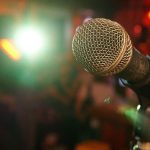 I mean, if you’re not writing poetry…why even write music right? I’m gonna blow your mind for a second, but you can write music any which way you want…especially if a song is about beer, dinosaur laser fights, or goblins.

Comedy rock isn’t for everybody, but open your mind for a minute and just remember, it’s ok to smile sometimes.

Here are 5 comedy rock bands that I can’t get enough of.

Most Rock 108 listeners will know Psychostick as we have played them quite a bit, specifically ‘Beer,’ but these dudes are fantastic live, have a hard driving metal sound, and infused with all sorts of great humor.

80’s inspired, rock, and dinosaurs shooting lasers….what more could you ask for? Oh right, one guy named Danny Sexbang and the other named Ninja Brian. NSP’s fan base is rabid and their music is funny as hell to listen too! Their music videos are some of the best things on the internet…easily a must listen and watch for comedy enthusiast.

The 80’s are back, along with the boning and drugs thanks to Steel Panther! A band that really doesn’t give a s&^% and I love it. When you see Steel Panther live? Leave your offenses at home, most of them will be violated.

Songs to check out: Gloryhole, Fat Girl, Death to all but Metal, Community Property, The Burden of Being Wonderful

While the band eventually evolved into pretty steady death metal band, Dethklok is animated glory that I wish was still around! I was a HUGE Dethklok fan, and they came from an Adult Swim TV show!

I mean, how could I have a list without the D? Truthfully I tried to find another band because I felt like this one was much too easy…but here we are. You know em, love them, it’s Jack Black and Kyle Gass.

Songs to check out: Tribute, The Metal. F Her Gently, Kickapoo