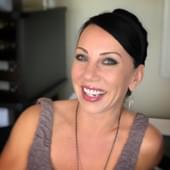 C.C. tries to balance her inappropriate, dude-like behavior by wearing dresses every day.  It doesn’t work.  She wants to be a classy lady someday.  She never will be.  She’s a coffee, Twizzlers and horror flick junkie here to rock your weekday mornings from 6-10 am.

She has no moderation skills and a short attention span, so you never really know what you’re going to get…​

So far this breakfast pizza is only in Des Moines, but perhaps it might be heading to Cedar Rapids soon?  The new pizza is called “Loopy Fruits” at Fong’s in Des Moines. Fong’s Pizza debuts new Fruit Loops breakfast pizza https://t.co/1Xw8yyXYym — KCCI News (@KCCINews) February 28, 2021 It has sour cream and cream cheese…… END_OF_DOCUMENT_TOKEN_TO_BE_REPLACED

This guy’s plans to rob a bank really went whoosh. A dude named Angel Masdev tried to rob a bank in Hartsville, South Carolina on Thursday . . . by putting a note in the PNEUMATIC TUBE at the drive thru. His note told the tellers to put all the money from the drawers back…… END_OF_DOCUMENT_TOKEN_TO_BE_REPLACED

Second-Born Children Are More Likely To Be Troublemakers

Okay, this caught my eye.  I’m a second-born, and was DEF a troublemaker compared to my older brother and younger brother.  I was the one sneaking out to go party, while my brothers never got into trouble.  I also have friends who are second-born and they were trouble as well. Here’s how this conclusion can…… END_OF_DOCUMENT_TOKEN_TO_BE_REPLACED

A chick crashed her Dodge Charger into a store in South Beach (Miami) just after midnight on Tuesday.  Not sure how she lost control of the car, but I’m thinking it was her 6″ heels!  (See video below.)  She came within INCHES of killing a homeless lady that was on the sidewalk, too! Shattered glass…… END_OF_DOCUMENT_TOKEN_TO_BE_REPLACED

It’s not just in Cedar Rapids, but all over Iowa that thieves are stealing catalytic converters from underneath vehicles.  So far just in Cedar Rapids, 41 have been stolen since November.  Cedar Rapids Police are working with at least 7 other law enforcement agencies in Iowa who are dealing with the same thing.  These dumbass…… END_OF_DOCUMENT_TOKEN_TO_BE_REPLACED

Pilot Spotted a UFO and American Airlines Didn’t Deny It

My fellow alien junkies, you will like this.  On Sunday, American Airlines flight 2292 took off on a routine trip from Cincinnati  to Phoenix.  When the plane was over New Mexico, the pilot spotted a UFO that flew over them. Here’s what the pilot said in the radio transmission: “Do you have any targets up…… END_OF_DOCUMENT_TOKEN_TO_BE_REPLACED