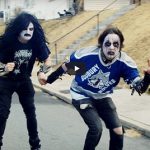 My co-worker sent me a message today, and man…am I happy that he did.

Norwegian black metal…it’s brutal, heavy AF, and glorious. However, I understand that it’s not for everybody…heck even I have a hard time getting into it, but I see the appeal as a metal head.

Then there are fantastic groups like Witch Taint! Witch Taint is a band seemingly from Gary, Indiana that is not only metal…but Norwegian inspired Midwestern death metal.

Will you be the next fan of Witch Taint? CLICK HERE and you could be!