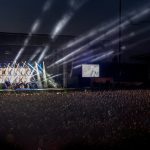 The Fourth edition of “Metallica Mondays” airs tonight at 7:00 PM!

To watch the concert for FREE, hit up Metallica’s YouTube Channel HERE

Metallica wrote, “Happy 150th Birthday to Golden Gate Park! We’ve had some incredible experiences in the park over the years including two appearances at the Outside Lands festival in 2012 and 2015.”

The very beginning of these shows is hilarious, because Lars introduces the concert from his home.  He’s usually sitting behind his drum set, and the way he describes the show is awesome and funny.

Turn your living room into an arena tonight!!