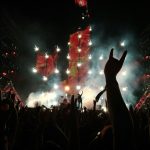 Sevendust officially announced the release date of their 13th album!  It’s called Blood & Stone, and it is due out on October 23rd.  It will have 13 songs, including their Soundgarden cover of “The Day I Tried to Live”.

Guitarist, Clint Lowery said,  “I think this is one of our strongest records in a while. I’m proud of all the music we do. Every band likes to say, ‘Oh, yeah, the new record is the best one we’ve ever done.’ I think it’s a very reflective record for where we’re at musically, where we’re at as a band. So that’s always a goal. I think we just wanna be genuine. We don’t wanna put out a dud record. Not everyone’s gonna like it; we understand that. We just try to do what we do best. We’re not the heaviest band in the world; we’re not a pop-rock band at all either. We’re just this aggressive band that has our own thing, and we stay true to that.”