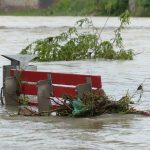 4 years ago, water ran through the streets of the Cedar Valley and Cedar Rapids.

In 2016, Iowans once again braced for the worst when a big storm that just sat over state brought a torrential downpour into the Cedar River. This naturally filled the river to the brim and all that water headed our way.

I had never been through a flood before, but memories of the 2008 flood that devastated Cedar Rapids business’ and homes flashed back to those that dealt with it and Iowa prepared for the worst. Fortunately there wasn’t nearly as much damage as the 2008 flood, but that is because we knew what was coming and really prepared for it! Sandbags, walls, you name it…we were ready.

Living in Waterloo during the time and learning how to report on a flood, I have never said the word ‘crest’ more times in my life. Rock 108 piped in our sister station KXEL for live reports on it too! I would look outside and see water just cascading down Jefferson St…it was mind boggling to me! There was no storm or anything, just a bright shiny day and water was just building more and more in the street.

I remember even taking this video about it too! However at the time, I was just mentioning about this massive lighting storm in Bremer County!

Thankfully to all the hard workers, we prepared for the worst and prevented the worst.