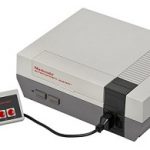 One of the greatest out there.

You may still have one hooked up to your TV or maybe hiding somewhere in your basement! Break out that old grey box as the Nintendo Entertainment System (known by many as the Original Nintendo), has officially turned 35 years old.

It’s hard to describe the impact this thing had back in 1985, but it brought back what was once thought as a dead medium. Today, video games are played in nearly every capacity…whether it be on your phone,, home console, computer, you name it…people are playing some kind of video game. Back in 1983-84 though? Video games were all but dead, until Nintendo came around and advertised this new concept of a video game, and sold it as a toy instead of a video game…and it was lead by this new character, an Italian plumber named ‘Mario.’

I can just say the name Mario and 9 times outta 10? You know exactly who I am talking about. I can say the word Nintendo, and chances are you know that I am talking about video games…THAT is the impact the original Nintendo had back in 1985 and still goes today.

To me? It was the start of a lifelong passion that I bet my parents would think I would grow out of, but I have never loved video games more than I ever have than I do today. While they aren’t the THING that keeps me busy anymore today, I still talk very fondly of them and the cultural impact they have put onto society today. I like talking more about video games than I really do playing them today….odd right?

35 years ago, it all started with a VCR looking machine that sat next to my parents VCR.